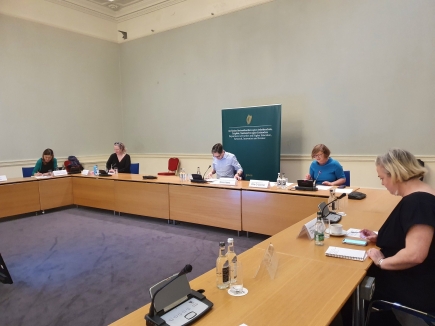 We know that sexual violence and harassment is a significant problem for young women in colleges and universities across Ireland. Women aged 18-29 are most likely to experience sexual harassment and violence, and many of these will be students which makes them less likely to report these crimes when compared with other groups.

Sexual harassment and violence both offline and online, has a significant impact on their lives, yet many young women experience this in an ongoing atmosphere of silence.   While sexual harassment and violence are not unique to higher and further education institutes, these institutes are uniquely placed in showing leadership on this issue and implementing the zero tolerance culture and preventative measures that can drive the long term societal change needed to ensure all women are safe.

We know that Third level institutes are uniquely placed to show leadership on this issue and implementing the zero-tolerance culture and preventative measures.

After the meeting, the National Women’s Council strongly welcomed the initiatives announced by the Department of Further and Higher Education, as we believe the initiatives can drive the long-term societal change needed to ensure all women are safe.

In particular, we welcomed the establishment of national HEI reporting system on consent framework implementation and also the announcement of a new national survey of student and staff experiences of harassment and violence on campuses.

The fact that this meeting took place so early in Minister Harris’ new role sends a strong signal to the higher and further education sector of the seriousness with which he takes the issue of sexual violence and harassment in third level education for students and staff. We will continue to work closely with Minister Harris to make progress on ending sexual violence and harassment at third level.

You can find out more about our It Stops Now campaign to prevent and combat sexual violence and harassment (SVH) and build a culture of zero tolerance in third-level education throughout Europe over on the It Stops Now website.