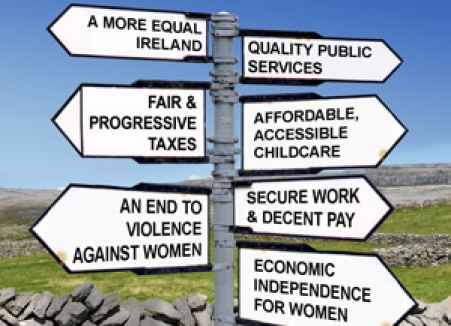 Orla O’Connor, Director of NWCI said,
“NWCI welcomes the €5 increase in child benefit as a partial recognition of the cost of living increases for families, one which NWCI called for in the lead up to Budget 2015. However it is important that we recognise that this measure, worth  approximately €70 million, does not offset cuts to the payment which amount to over €400 million since 2009 or the impact of increased property and water taxes on many families and does not address childcare costs, which average €800 - €1000 a month.”

Alice Mary Higgins, Policy Officer at NWCI said,
“Tax cuts should be subject to the same cost/benefit scrutiny as any public spending  and must also be checked to ensure progressivity.  While it seems that a number of the changes to USC within this Budget may offer some benefit to low income earners, the reduction in the top rate of tax to 40% is of concern, although it is good to see disproportionate benefits to the top ten percent of earners somewhat countered by the new 8% rate of USC.”

“Women are more likely to be in low paid, precarious work, and their income is more likely to have dropped during the recession.  Extension of the child dependant allowance for the first months of employment for a partial recognition of the poverty trap exists in the transition between welfare and work for many women but does not address the fundamental issue of those trapped in long term, low paid, precarious work. Incentives for employment in this Budget must deliver quality jobs. It is also essential that the new Low Pay commission delivers real change in this area.”

Orla O’Connor continued,
“National Women’s Council of Ireland has consistently flagged the importance of investment in our social infrastructure and public services.   While there is some recognition in this Budget of the crisis in social housing and the need for long term planning, it is disappointing that the same long term thinking is not applied to the crucial issue of childcare. The potential to develop a quality publicly subsidised model; of childcare on par with other European countries is one opportunity missed in this budget.  A second free pre-school year would have cost €173 million and delivered real economic and social dividends, particularly in light of the huge gender gap in labour force participation in Ireland.”

Alice Mary Higgins commented,
“With regards to older women, the increase in the living alone allowance is welcome.  However, the ending of the pension levy does not address the ongoing inequality in private pension tax relief for high income earners, take us further towards badly needed pension reform  or reverse changes to the contributory pension bands which have hit women hardest”.

Orla O’Connor, Director of NWCI concluded,
“A recent ESRI study has highlighted the fact that women have suffered more under austerity.   The test of this Budget will be whether it takes us closer to a more equal and sustainable society and economy. With that in mind, NWCI believe it is essential that all measures announced today are subjected to a full gender and equality proofing before the introduction of the Finance Bill.”