Longford Women's Link (LWL) is a women's centre based in the rural midlands town of Longford. Founded in 1995, our vision is that women in Co. Longford can fulfill their potential in a safe and equal society.

The three integrated pillars of our work are: 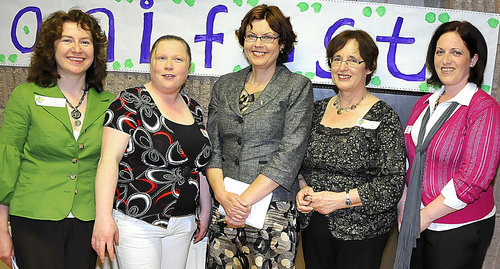 Our integrated approach looks at the various barriers and underlying issues faced by women and their families in Longford, how these issues interact, and then designs and implements interventions which feed into each other, strengthen each other and provide a multi-dimensional, holistic response.

It has long been established that gender inequality is exacerbated by poverty and disadvantage, and is also a key factor in its persistence. We, as a women's organisation, focus our efforts on identifying and addressing key inequalities that prevent women living in Longford achieving their social and economic potential. We believe that this will benefit not only the women themselves, but also their children, family and the wider community.

Any strategy to address gender inequality has to seek to address the absence of women in the local and national decision making process. Here in Longford, LWL decided to focus on the local elections to Longford County Council in June 2009 to highlight the lack of women's perspective on key local issues.

Women are crucial stakeholders in all decisions made by Longford County Council. They make up 50% of the population, and play crucial roles in maintaining and caring for families and communities. The whole community loses out when women's voices and perspectives are not adequately reflected in local policy decisions. There is huge diversity among women, but the roles they play mean that their perspectives are often different to those of men. During the Manifesto campaign, issues such as the unsuitability of electric storage heating in local authority housing, the design of new housing estates were raised. However, few women are involved in local decision making in Co. Longford .Only two of the twenty one recently elected county councillors are women. This has implications far beyond the role of the County Council itself as councillors immediately on their election were nominated on to 26 local and regional decision making bodies.

A key element of the manifesto campaign was women's attendance at local council meetings. In addition to creating a visible presence of women in the council chamber, this has the effect of demystifying the decision making process for local women. As a result, what has come across very clearly is that women feel very alienated from and sceptical about the local democratic process. However, the emphasis has been on looking for ways of developing positive, constructive working relationships between women and their local representatives. A key question explored throughout the campaign was 'What kind of relationship do you want to have with your local representatives?' The responses to this question emphasised the need for respect, listening to women's perspectives, accountability, honesty, access, and action. The consensus which emerged is that a new formal structure is required at local level to facilitate consultation and partnership with women in the local community.

This emerging solution is to create a recognised structure within the County Council where women could communicate directly with the elected councillors in their electoral area, and also with other women in the wider community.

The manifesto group has been given permission to make a presentation to a full meeting of the county council in January.