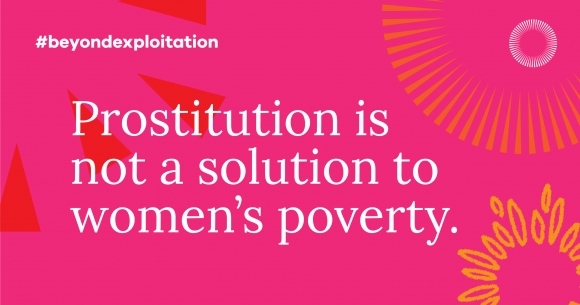 The National Women’s Council (NWC) today announced an important new campaign Beyond Exploitation – Defending the human right not to be bought or sold for sex.

The campaign is led by the National Women’s Council with partner organisations Immigrant Council of Ireland and Ruhama and aims to bring together civil society organisations to campaign for equality and freedom from sexual exploitation. A first step will be the recruitment of a Coordinator for the campaign.

“We are looking forward to leading this important new campaign that will support the most vulnerable and silenced people in prostitution to have a voice. We know that prostitution cannot be the answer to women’s poverty or precarious immigration status. We are advocating for policies and measures that give all women and girls a real choice not to be bought or sold for sex.”

“Central to our campaign is the Equality Model and the 2017 law that ensures that the selling of sex by individuals is no long illegal. But legislation is only one part of our approach. Only when nobody is forced by coercion or by circumstance to sell sex can we have a more equal society. This is why we are advocating for full, integrated supports and opportunities that allow all people in Ireland to choose not to enter prostitution because of poverty, migrant status or discrimination, and that allow people to leave prostitution if that is their choice.”

“Leaving prostitution is incredibly hard. You may have left the street or brothels behind you but what comes with you are not only the practical issues. The severe physical and psychological effects, the rapes, physical assaults, the trauma come with you.

A strong support system is needed, run by organisations who understand what we have been through and what has been done to us.  Enacting the law in March 2017 was aimed at stopping those who purchase women and girls for sexual exploitation. But the State also has an obligation to help repair the damage those people did and to prevent it happening to others.  I survived because of the support system I was lucky enough to have and I am honoured to support the Beyond Exploitation campaign.”

More information about Beyond Exploitation is available on https://www.beyondexploitation.ie/

More information about the job advertisement