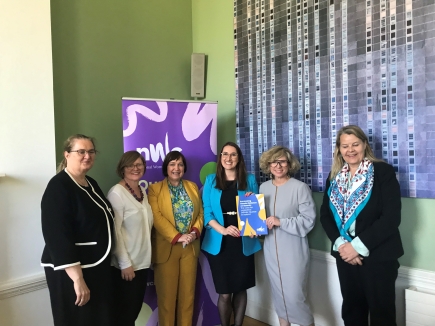 The National Women’s Council of Ireland (NWCI) is calling on the Government to look to the success of the Norwegian model of legislative gender quotas in its urge for political support for the Private Members Bill on gender quotas for boards.

The call comes following a seminar hosted by the NWCI today (27.05.22) in Dublin, in partnership with the Norwegian Embassy, that spotlighted how learnings from gender quotas introduced in Norway and other countries can be applied to Irish legislation, as well as to employer policies in Ireland.

Commenting today, Emma DeSouza, Women in Leadership Coordinator at the National Women’s Council, said: “The contributions from our Norwegian colleagues at the seminar today clearly demonstrate how the introduction of gender quotas in their country has been the number one action that accelerated change across corporate boards to ensure that women are better represented.

“The Norway example shows that legislative quotas work. The Private Members Bill, introduced by TD Emer Higgins’ is our opportunity to make it work here and we urge the Government to support it.

“While progress has been made in Ireland, women here are still substantially underrepresented in senior roles and decision-making spaces. According to the latest CSO Gender Balance in Business Survey, in 2021 only 22% of members of Boards of Directors in Ireland were female; one in eight CEOs in large enterprises in Ireland were women; and men accounted for 86% of Board Chairpersons.

“Quotas redistribute power at the top of the labour market, resulting in significant trickle-down benefits, both in terms of improving financial performance but also for women at all levels in a company. The Bill currently making its way through the Oireachtas includes a 33% quota for women on corporate boards, rising to 40% after three years, and introduces possible sanctions for companies that fail to comply with the gender quota. This would have a significant impact for representation of women on boards across Ireland.”

Liv Monica Stubholt, a recognised business lawyer and former politician for the Norwegian Centre Party, delivered a keynote address at the event that focused on how gender quotas in Norway increased women’s representation on boards from 7% to 40% within a few years.

Ms. Stubholt said, “The Norwegian legislation has been very helpful to compensate for the traditional over-representation of men in the board room. More measures will be needed however to accomplish full gender equality.”

The event featured contributions from other political, business and international leaders, including:

The ‘Increasing Gender Balance on Boards: The Case for Legislative Quotas’ event was part of the National Women’s Council of Ireland’s ‘Balance the Odds’ campaign which aims to increase women’s representation on corporate boards. It was supported by the Community Foundation Ireland and the Norwegian Embassy in Ireland.