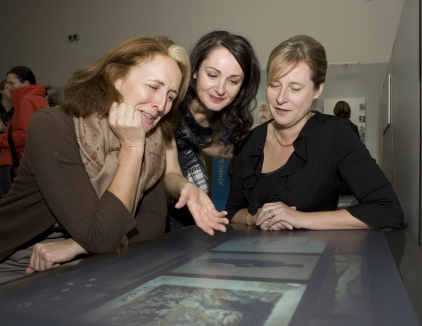 
On 18 November, politicians North and South, feminists, academics, historians, theatre producers and representatives from Irish language organisations and cultural institutions gathered at the National Library of Ireland to join actor Fiona Shaw for the launch of Alice Milligan and the Irish Cultural Revival, a ground-breaking exhibition celebrating the work of Alice Milligan, 'possibly the best kept secret in Irish history'.

This iconic and fascinating journalist, political activist, feminist and human rights campaigner was one of 13 children born in 1866 into a middle class Protestant Unionist family living in Co Tyrone. She studied history and literature at King's College London; taught herself Irish; became a staunch Irish nationalist and supporter of the 1916 Rising; was hailed as the 'infant nurse' of the biggest Irish political movement in the 1920s, and was a tireless human rights campaigner as well as an organiser of the Irish language movement in Ulster.

One of the most intriguing and politically engaged figures during the formation of modern Ireland, she was on first-name terms with James Connolly, WB Yeats, Roger Casement, Arthur Griffith and Maud Gonne. She wrote for 60 Irish newspapers for over 60 years; was considered the most successful producer of theatre plays in Ireland in her day, and was described as 'the best living Irish writer' by the poet Thomas MacDonagh.

A 19th and 20th century 'Cultural Ambassador', her magazines, theatre plays, novels, short stories and poems achieved an extraordinary global reach; her newspaper articles were widely read in South Africa, America, Europe and South America, and she was hugely successful in connecting the Irish Diaspora to the national movement for the development of Irish arts and culture.

Although largely forgotten today, her numerous achievements, including her success in connecting with the Irish Diaspora, were recognised by President Éamonn De Valera. He presented her with an Honorary Doctorate in 1941 to mark not only her long career as a prolific journalist but also as a theatre producer, playwright, Latin teacher and founder of the multiple cultural, literary and feminist organisations that played such an important part in social, cultural and political life in Ireland.

Alice Milligan and the Irish Cultural Revival is now open to the public at 2 Kildare Street, and continues until February 2011. Admission is free. The material for the exhibition is drawn from the archives of the National Library of Ireland. It is part of a broader multimedia exhibition, Discover your National Library, which features treasures from the Library's collections.

Alice Milligan was born in 1866 in a village near Omagh, Co Tyrone. Educated at Methodist College Belfast, she went on to study English literature and history at King's College London, and later trained as a Latin teacher in Belfast.

In the late 1880s, she regularly gave talks to archaeology groups during which she projected pictures onto walls using gas-powered magic lanterns. These were methods and technologies of communicating that she later radicalised in her theatre productions. As part of her work for the Irish Cultural Revival, Alice Milligan not only projected images representing Irish-Ireland into public spaces, she devised a theatre movement in which people themselves embodied the pictures that they projected back into their own communities.

Milligan played a central part in Irish cultural life. Amongst many innovations, she used the very popular form of tableaux vivants (in which actors on stage hold a still pose for some moments) to dramatise scenes from Irish history and culture. She was also one of the first theatre impresarios to use Irish actors rather than English actors in her plays. In addition, many of her theatre productions featured spoken Irish.

Magazines that she established and co-edited included The Northern Patriot and The Shan Van Vocht, two ground-breaking journals in Belfast, both launched in 1895. In 1896 she opened an office in New York to help market the journals to the Irish Diaspora in America.

With her sisters, she collected and published Irish folk songs from Co Tyrone and actively promoted the Irish language as a 'lantern lecturer' for the Gaelic League. As a result of Milligan's hugely popular cultural initiatives, the number of Irish language speakers in Belfast rose from 900 to almost 4,000 within ten years.

In 1891, she moved to Dublin to learn Irish and became fascinated by nationalist politician Charles Stewart Parnell. His sudden death in October of that year confirmed the shift in her political sympathies, and she became increasingly involved in promoting almost every aspect of Irish culture.

Alongside her cultural interests, Milligan was also a political and community activist. She helped to organise the 1898 centenary commemorations of the 1798 rebellion, and in 1916, after the Easter Rising, she travelled to London to attend the trial of Roger Casement. She spent much of that year visiting political prisoners, and after Partition, when she was again living in Northern Ireland, she helped found the Anti-Partition Union.

Although much of the 1930s were spent by her in the role of caring for relatives, she remained engaged by contemporary issues. During the 1940s, when she was well into her seventies, she was remained active in international causes such as campaign for Indian famine relief.