“I often have a feeling of being invisible” 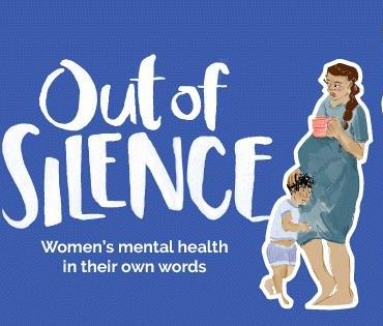 “My mam would suffer from depression and instead of talking to her and giving her help, they just kept giving her tablets”.

“There is nothing within the health service to explain the experience of abuse when you are getting treatments. There is nowhere you can mark down what has happened to you.”

“Women are seen as crying wolf, their suicide attempts are dismissed.”

Women are twice as likely to be affected by depression and anxiety as men.[1] Ireland has the highest rate for child suicide of girls in Europe.[2] And we have seen a worrying trend, where women in some of the poorest parts of Dublin are taking their own lives in the same numbers as men for the first time.

Against this backdrop, the National Women’s Council of Ireland (NWCI) today launched its new report 'Out of Silence, women’s mental health in their own words' at St Patrick's University Hospital, Dublin 8. The launch coincided with the first meeting of the Women’s Mental Health Network, a new collaboration between NWCI and Saint Patrick’s Mental Health Services.

Based on conversations with over 100 women from across Ireland, the ‘Out of silence’ report documents for the first time the specific mental health needs of women and girls in Ireland and highlights necessary steps to prioritise prevention and provision of services going forward.

“Women’s voices are too often absent from the discussions on mental health in Ireland.  Our report aims to bring women’s mental health out of this silence. It highlights women’s direct experiences, how they cope, how they keep themselves well and how they feel they could be better supported by services. Recent women’s healthcare scandals have shown the need to listen to women and use their experiences to inform health policies and the provision of services for women and girls in all our diversity.”

“Unfortunately, the findings of this project show that there are deficits in mental health provision for women. If we want to improve mental health outcomes for women, we must address issues such as women’s shame and guilt when speaking out, the fear of their children being removed when seeking support, depression, low self-esteem and long waiting lists for care.”

“Women account for the majority of admissions to St Patrick’s Mental Health Services, with the ratio of female to male admissions standing at 3:2. The launch of the Women’s Mental Health Network will provide an opportunity for collaboration and learning among different voices and sectors to the progress women’s mental health in Ireland. While women and men experience mental health difficulties to equal degrees, there are important differences as regards needs, experiences and causes or contributory factors. We need to become more aware and responsive to these differences so that mental health services, and mental health promotion and prevention efforts can be more effective.”

The event was chaired by writer and broadcaster Louise McSharry.

The newly created Women’s Mental Health Network aims to provide a forum for information-sharing and networking among interested parties, and to advance interdisciplinary and multi-agency collaboration to progress shared aims and goals in the promotion of women’s mental health.

[1] Research evidence from epidemiological studies from the UK, US, Europe, Australia and New Zealand shows that women are up to 40% more likely than men to develop mental ill health; women are around 75% more likely than men to report having recently suffered from depression and around 60% more likely to report an anxiety disorder. See Freeman, D and Freeman J (2013) The Stressed Sex: Uncovering the Truth about Men, Women and Mental Health. Oxford University Press.

[2] What are European countries doing to prevent intentional injury to children?, 2014 (Figures relating to the period 2009-2011) http://www.childsafetyeurope.org/archives/news/2014/info/ciir-report.pdf