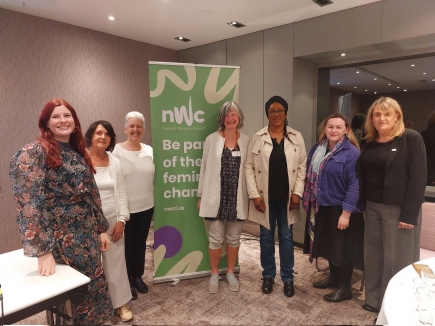 Margaret Martin is the former CEO of NWC member Women’s Aid. She has served as Deputy Chairperson of the National Women’s Council for the last two years. During this time Margaret was closely involved in developing NWC’s All-Island work and Strategic Plan 2020-2024 - No Woman Left Behind.

Her feminist involvement started in the late 1970s as a volunteer for the Dublin Rape Crisis Centre. Her twin passions have been challenging violence against women and providing empowering education. Prior to her role in Women’s Aid, Margaret Martin worked in AONTAS, the National Women’s Council and as a Co-Ordinator for a North/South leadership programme for grass-roots women leaders.

After her election, Margaret Martin said,

“I am delighted and honoured to be elected as Chairperson of Ireland’s national women’s representative organisation. I look forward to working with my fellow Board members and with NWC’s Director Orla O’Connor and the NWC team to progress the key issues facing women today in Ireland. In 2023, NWC will be marking its 50th anniversary which will be a key opportunity to highlight the achievements for women’s equality over the last five decades and address the many barriers to true equality for women and girls that remain.”

Jennifer Okeke Campbell is a community activist and former chairperson of a migrant women’s organisation based in Ireland. She is currently the Anti-Trafficking Officer with Immigrant Council of Ireland. Jennifer has extensive experience on issues of gender, human rights and migration (refugees, asylum seekers, direct provision). Jennifer is currently rounding up her PhD with Dublin City University exploring the experience of migrant women trafficked into/through Ireland for sexual exploitation.

“I am delighted and humbled by this opportunity given to me by the women of Ireland to serve as the Deputy Chairperson of the National Women Council of Ireland. I look forward to working closely with the Director of NWC, Orla O’Connor, my fellow board members and the staff to support the work of the organisation in promoting the rights and giving voice to issues that affect women and girls”

NWCI’s newly elected board members include:

NWC would like to thank our outgoing Chairperson, Louise Lovett and our outgoing Board members, Vivienne Glanville and Emilia Marchelewska for their commitment, work and support over the last two years.