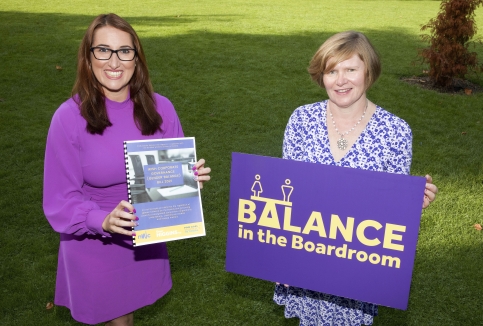 The proposed Private Members’ Bill aligns with NWC’s ‘Balance the Odds’ campaign which launched earlier this year to increase women’s representation on corporate Boards. The Bill includes a 33% quota for women on boards, rising to 40 % after three years, and introduces possible sanctions for companies that fail to comply with the gender quota.

“NWC has consistently called for gender quotas to increase the representation of women across all sectors of society. This Bill is significant in that it introduces a gender quota of 40% for Boards and foresees clear sanctions for companies that are not meeting the gender quota. This Bill has the real potential to improve women’s representation on Boards and we call on the Government to support this Bill without delay. “

“Evidence indicates that all-male boards and executive director appointments continue to be stubbornly resistant to change. The lack of women in leadership positions means women are excluded from the rooms of power, where key decisions affecting their lives are made. This has serious consequences for their lives and entrenches gender inequalities. These inequalities have been further amplified in recent months by the Covid-10 pandemic.

Amid increased caring responsibilities, evidence suggests that many women have had to either leave the labour market, or are downshifting their careers. As a result, companies risk losing women in leadership – and future women leaders – and unwinding years of painstaking progress towards gender equality. This bill is a key step in ensuring that women are present in our boardrooms and fully aligns with NWC’s ‘Balance the Odds’ campaign and research which called on the Government to implement a 40% quota for women on Boards.”

“It is obvious that a voluntary target-led approach has not produced the results necessary to justify the continuation of soft measures. By contrast, there is robust international evidence that legislative quotas work well – and a groundswell of support across political parties and businesses alike for a legislative approach.

“In addition, a growing number of studies clearly make a business case for increasing the number of women in leadership roles. Including women in senior management and on boards makes full use of the available talent, incorporates more diverse perspectives and life experiences, and – in turn – leads to greater innovation, higher productivity, and better working conditions.”

“After adoption in countries including France, Germany, Italy and the Netherlands, quotas have influenced the number of women on boards, the performance and outcomes of decision-making bodies, and broader public attitudes. Quotas redistribute power at the top of the labour market, which results in significant trickle-down benefits, both in terms of improving financial performance but also for women at all levels in a company.”

NWC’s Report Increasing Gender Balance on Boards: The case for Legislative Gender Quotas in Ireland, 2021 can be accessed here: https://www.nwci.ie/images/uploads/WomenOnBoardsReport.pdf

NWC’s campaign for gender quotas for foards is funded by the Community Foundation Ireland (CFI).