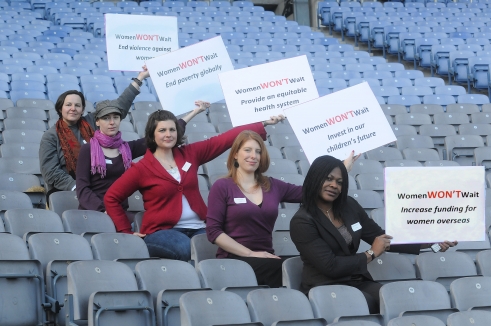 Is democratic representation of both women and men too much to ask for in 21st Century Europe?

We, representatives of more than 2500 women's organisations from across the 27 European Union (EU) Member States and three EU candidate countries, write to remind you, our representatives, of your democratic duty to ensure that women are represented in the highest levels of European governance.

It will be an exciting moment when you, as our elected leaders, will make public nominations for some of Europe's most prestigious and powerful posts. On 29-30 October, you will discuss the members of the new Commission and candidates for the so called "EU top jobs", namely the potential first ever President of the Council of Ministers and the incoming EU foreign policy chief. The people you choose will have the power to shape the future of Europe, our countries and our individual lives in significant ways. We therefore trust that the power we as citizens have placed in your hands will be used wisely, to nominate people who represent all of us, and work for all of our interests, including the half of us who are women. Already, the President Elect of the new Commission is a man, and the President of the new Parliament is likewise. Will there be a 50/50 gender balance in the new European Commission and will any of the four top posts be held by a representative of the other 50% of European citizens?

The European Union you lead today is a Union since 1957 committed to the fundamental democratic principles of justice, diversity and equality, including equality between women and men. Nevertheless, it remains a Union where gender inequalities prevail and women are largely excluded from the highest echelons of decision-making. Fifty years of commitment have not paid off as they should have, and now is the time for action, and for leading by example.

Almost 350 prominent persons have supported the EWL 50/50 Campaign for Democracy, including President of the European Commission José Manuel Barroso and the Vice President Margot Wallström, Vice-Presidents of the European Parliament (2004-2009) Rodi Kratsa and Diana Wallis, Nobel Prize winner Orhan Pamuk, Prime Minister of Belgium Herman Van Rompuy, Slovenian President Danilo Türk, Deputy Prime Minister of Spain Teresa Ferdandez de la Vega and of Belgium Joëlle Milquet, former President of Ireland Mary Robinson and former President of the European Parliament Simone Veil. 15 leading policy makers from the European Commission and Parliament reaffirmed their commitment on 16 September by issuing a Statement calling for gender balance in European politics. Thousands of women and men have signed the EWL 50/50 petition for equal representation of women and men in European policy-making. Taking their voices into account and implementing a fair system of representation should not be so difficult: the European Women's Lobby has long been asking governments to embrace a system of dual nomination, notably for the European Commission, putting forward each time one woman and one man candidate. From this huge pool of talent let the negotiations select our most able representatives, representatives who unequivocally reflect the needs and aspirations of all Europeans, representatives who will work for balanced and just societies for all, representatives who will be able to hold their heads high on the global stage and avoid a blush when they lecture others on human rights.

Dear members of the European Council,

There is surely no need to remind you that your democratic mandate is not something to be taken lightly. We very much hope that you will take into consideration our legitimate demands and stand by your responsibilities to all your people - both men and women - and fight for their most basic right of democratic representation.

****Plus the signatures of 32 members of the EWL