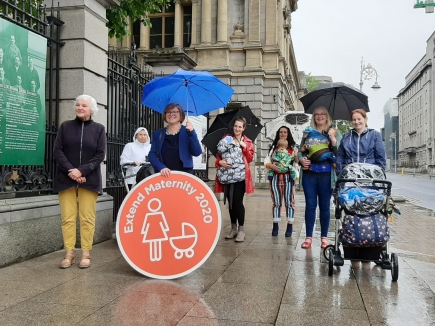 Women on maternity leave have had a particularly difficult time during the Covid-19 crisis. Together with the women affected, NWCI  has led and supported two important campaigns to support women's rights and well-being during this time.

We are supporting the #ExtendMaternityLeave2020 campaign which has been set up by a group of women currently on maternity leave. Together they collected 28,000 signatures for a petition calling on the Government to extend maternity leave and pay for a once off 12 weeks period during the crisis.

In many cases, women gave birth without a partner or loved one present, and faced into motherhood without family or professional support. Babies have missed developmental checks, vital scans, hospital appointments and even vaccinations have been cancelled or delayed. There is a real urgency to this situation, as many of the women impacted are due back at work in the next week or two.

NWCI held a photocall  with the women outside the Dail to remind the Government of the positive response that then Taoiseach Leo Varadkar had given to the women in relation to their demand. Many TDs and Senators expressed their support for the women at the photocall and it was raised also during Leaders Questions in the Dáil. Hopefully we will see some movement on this issue very soon.

In May, we successfully led the #NoDiscrimination campaign that resulted in the Government changing its discriminatory policy of excluding women returning from maternity leave from the Temporary Wage Subsidy Scheme. As part of this campaign, our members and supporters sent almost 2,000 e-mails to TDs inevery constituency calling on them to urge Minister for Finance, Paschal Donohoe to change the discriminatory practice.