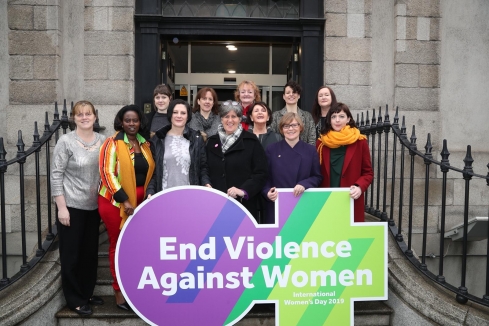 NWCI today welcomed the International Women’s Day ratification of the Istanbul Convention, after a long campaign by women’s groups and organisations working to end violence against women.

“This International Women’s Day is a landmark day for women in Ireland, with the ratification of the Council of Europe Convention on Preventing and Combating Violence against Women, or Istanbul Convention, as it is more commonly known. We are here today because of the campaigning from women’s groups, survivors and organisations campaigning to end violence against women. Today, it is important to give a special thank you to women who showed such bravery in speaking out about their experiences of domestic and sexual violence and abuse, and their experiences of being re-victimised in family and criminal courts.”

“The Istanbul Convention provides the framework that we need to protect women and children, and to work towards eliminating violence against women. What is so important about the Istanbul Convention is that it says very clearly that it is the responsibility of the State to prevent violence against women. This means the State is responsible for tackling the root causes, and for the policies and measures that are required to bring about cultural change. Furthermore, the Convention states that the obligation is on the State to protect victims of violence against women, and to prosecute the perpetrators. Significantly greater priority and resourcing are required for our judiciary and for An Garda Siochana.”

“Now that Istanbul has been ratified, we must work quickly toward its full implementation. This means, for instance, increasing the current amount of refuge spaces available, as we currently only have one third the recommended amount. Alongside this, we urgently need to establish multi agency domestic homicide reviews, to greater protect women and children.”

“Frontline providers, communities and affected women must be involved in the monitoring process, to ensure that the Convention works for women. The National Women’s Council of Ireland is preparing for full monitoring of the Istanbul Convention from a women centred perspective.  It is time to finally match our response to the scale of the problem; the ratification of Istanbul means there are no further barriers to action.”

Irish Observatory on Violence against Women

Ireland signed up to the convention in 2015. The Government agreed at the time of the signing of the Istanbul Convention to an action plan that contained outstanding legislative and administrative actions identified as necessary to enable Ireland’s ratification of the convention. Those actions were incorporated into the second national strategy on domestic, sexual and gender-based violence, which was published in January 2016.

Countries that have ratified (33)