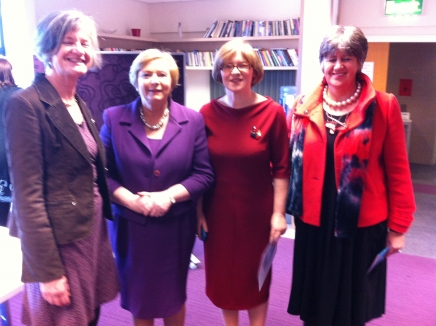 At the launch and publication of “Violence Against Women: An Issue of Gender: Highlighting the Role of Gender in Analysis and Response” today, the Irish Observatory on Violence Against Women, chaired by National Women’s Council of Ireland (NWCI) called for Ireland to sign, ratify and implement the Council of Europe Convention on preventing and combating violence against women and domestic violence, to eradicate all forms of violence against women, specifically rape. The publication was launched today by Minister for Children and Youth Affairs Frances Fitzgerald, during the 16 days of action, part of a European wide strategy to highlight the need to implement the Convention.

Margaret Martin, Director of Women’s Aid said,
“One in five women in Ireland will experience domestic violence at some point in their lives. In the context of the prolonged recession, there has been a worrying decrease in the options and services available to victims of all forms violence against women.”

Orla O’Connor, Director of NWCI added,
“Violence against women comes at a high cost to society and responses need to be located within a gender equality framework. Our publication highlights how service providers must be aware of how gender creates different roles for women and men in society. It is by taking account of unequal power relations between women and men that service providers will be able to address different vulnerabilities experienced by different groups of women and men.”

Orla O’ Connor concluded,
“There can be no real equality between women and men if women experience gender-based violence on a large-scale, and state agencies and institutions turn a blind eye. The Council of Europe Convention is a benchmark at international level, and Ireland must show its commitment to eradicating all forms of male violence against women by signing, ratifying and implementing the Convention as a matter of urgency.”

Note to editors:
The Irish Observatory on Violence Against Women operates under the auspices of NWCI since its formation as part of an EU Daphne initiative in 2002. The Irish Observatory links into the European Women’s Lobby (EWL) European Observatory on Violence against Women.  The EWL Observatory’s main objectives are to identify critical and emerging issues in order to feed the policy work of the EWL to advocate for improved policies and service provision for prevention and support of women victims of male violence. It raises visibility of the phenomenon of male violence against women and monitors the commitments at local, regional, national and European level regarding violence against women, highlighting advances and set-backs, as well as providing relevant data. The EWL Observatory on violence against women comprises now 33 experts (one from the 27 Member States and from 6 accession/neighbouring countries), nominated by national EWL coordination. Members of the National Observatory are, Akidwa, Cork Sexual Violence Centre, Dublin Rape Crisis Centre, European Women’s Lobby through the Irish Representative on the European Observatory, Immigrant Council of Ireland, National Women’s Council of Ireland, Pavee Point Traveller and Roma Centre, Ruhama and Women’s Aid.

The European Women’s Lobby (EWL) is the largest umbrella organisation of women’s associations in the European Union (EU), working to promote women’s rights and equality between women and men. EWL membership extends to organisations in all 27 EU member states and three candidate countries, as well as to 20 European-wide organisations, representing a total of more than 2,500 associations. womenslobby.org