Who is your feminist Taoiseach? 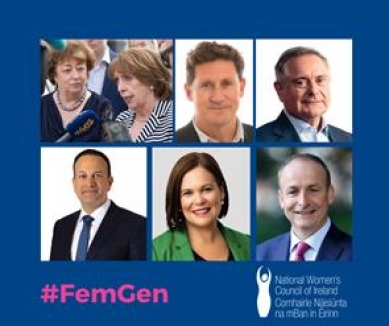 As part of our #FemGen general election campaign, the National Women’s Council of Ireland (NWCI) has asked party leaders from the main political parties to answer four key questions outlining their commitment to women’s equality.

“The general election campaign has brought some of the most pressing issues for the electorate to the fore, including housing, health, pensions, childcare, violence and the climate emergency. Any leader from any political party who is serious about solving these issues will need to understand the significant and specific impact these issues have on women’s lives.”

“We thank the party leaders for taking part in this initiative and welcome the commitment by all to women’s equality as outlined in their responses. We want to see a Taoiseach and all party leaders to be ambitious for the change required to achieve equality for women in Ireland and also the pace of change, which is still unacceptably slow.

Achieving women’s equality will require a commitment to invest significant resources in our public services and infrastructure, new legislation and new policies. For parties where women are still greatly underrepresented, it means having a clear strategy on how to ensure more women are running and candidates reflect the full diversity of the people living in Ireland.”

NWCI has published its Feminist Ireland manifesto which outlines 10 key asks for women’s equality. 100 candidates across 35 constituencies have so far signed the manifesto.