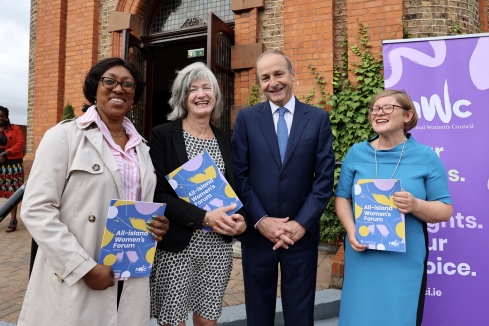 An Taoiseach Micheál Martin today launched the report of the National Women’s Council (NWC) All-Island Women’s Forum (the Forum).  The report highlights the findings and recommendations of the NWC All-Island Women Forum following one year of monthly discussions on key issues affecting women across the island.

The Forum is coordinated by the National Women’s Council (NWC) and brings together women from both sides of the border, from marginalised communities, and spanning generations. As well as centring women’s voices in peacebuilding, the forum found that more must be done to build all-island alliances and solidarity.

An Taoiseach Micheál Martin launched the report as part of the government’s Shared Island Initiative. An Taoiseach said:

“The All-Island Women’s Forum convened by the National Women’s Council is making an important contribution to the Government’s Shared Island initiative, bringing together women from different communities and backgrounds on this island, on issues of common concern.

The Forum is also putting a necessary focus on addressing underrepresentation of women and building on the important role that women have played in the Peace Process, over decades.

The Forum’s recommendations will help shape the all-island agenda and discussion on critical issues for women and society more broadly in the time ahead.

I welcome that the Forum has been supported through the Reconciliation Fund of the Department of Foreign Affairs and look forward to its work continuing”.

The Forum has made a number of recommendations to both governments, including developing an all-island strategy on gender-based violence, introducing gender quotas for local politics, and a North-South media partnership which would increase women’s voices on all-island issues.

“The NWC All-island Women’s Forum seeks to be a catalyst for change and is ambitious in seeking substantial reforms that will enable women to take their rightful place as leaders in our society. It has clearly demonstrated its ability to break down barriers in understanding, both between communities in Northern Ireland, and between North and South, creating a new space for dialogue and building understanding. The need for long-term structural funding of this kind of project is abundantly clear.”

“Evidence demonstrates that women in peace processes are more likely to focus on reconciliation, economic development, and transitional justice – all critical elements of a sustained peace. It is to these aims that members of the All-island Women’s Forum have worked diligently toward over the past 12 months, delivering an ambitious set of recommendations to governments North and South today. The Good Friday Agreement includes a commitment to North-South equivalence on rights as well as the full participation of women in public and political life, and yet women remain largely underrepresented in decision-making spaces and peacebuilding structures. The All-island Women’s Forum seeks to address this underrepresentation.

As we approach the 25th anniversary of the Good Friday Agreement, with mounting challenges and political instability, now is the time to redouble our efforts in peacebuilding and reconciliation, key to doing so is the inclusion of women’s voices, in all their diversity.”

“It has been clear from the level of engagement and the breadth of issues raised that the All-island women's forum is an essential and evolving space in civic society across the island of Ireland, with huge untapped potential. NWC sees this project as a long-term strategic piece of work and will continue to grow this essential work.

The development of the Women’s Forum is an historic opportunity to develop our all-island work in line with NWC’s new Strategic Plan ‘No Woman Left Behind’.  It is also in line with UN Security Council Resolution 1325 on Women, Peace and Security.”

Where: Thomas Prior Hall, Ballsbridge.

Consisting of 28 members, 14 from the North and 14 from the South, the Forum aims to build sustainable North South links, provide a space for marginalised communities, and build better understanding and inter-community links. The forum met on a monthly basis over the course of one year and today is launching a report to address issues on an all-island basis that affect women, including a series of recommendations for both the Irish government and Northern Ireland Assembly.

Recommendations for Government’s North and South

The All-island Women’s Forum calls for a joint North-South education scheme that encourages free movement and education exchange should be established to incentivize North-South exchanges.
An All-Island media partnership with adequate investment from State broadcasters, North and South, should be developed to increase women’s voices on all-island issues, e.g., a women’s only all-island podcast series examining topics incl.

The Forum represents a contribution by the National Women’s Council to the Irish Government’s Shared Island initiative in the Department of An Taoiseach, by enhancing civil society links and supporting engagement by women, across communities and traditions on the island, on issues of common concern.

The forum is funded by the Department of Foreign Affairs Reconciliation Fund.