Women hurt by war, not rewarded in recovery 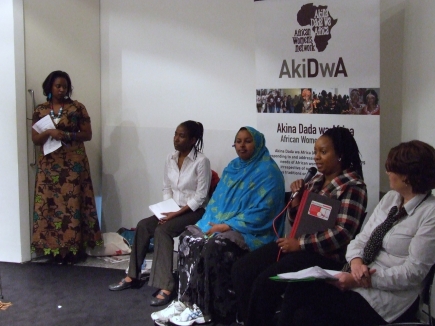 Three quarters of the world's internally displaced persons and refugees are women, a seminar on Women in Armed Conflict was told in Dublin on 14 October. Kenyan social worker Caroline Munyi, who works with the Aikidwa organisation, said that women play vital roles in protecting children and keeping families together during conflict, and in peacebuilding afterwards. However, this work was largely unrecognised and women were "rarely rewarded" in post conflict recovery. Ms Munyi has worked in conflict situations in Kenya and Northern Uganda.

The seminar, organised by Aikidwa, also heard from Tendai Madondo, a Zimbabwean currently working in Ireland for Christian Aid, and with experience of conflict and post conflict situations in Afghanistan, Rwanda, Sierra Leone, Cambodia, and, most recently, Gaza. "I could not believe I was watching Israel demolishing the homes of families in Gaza," she said. She also spoke about the conflict caused in households because of shifting roles caused by war.

Susan McKay, director of the National Women's Council of Ireland, spoke about the powerful role women can play in post conflict situations. "During 14 years of civil war in Liberia, in some places more than 90% of women were raped, and high levels of violence against women and children persist," she said. "However, a feminist president, Ellen Johnson Sirleaf, a minister for gender, and the association of women lawyers, are together working to empower Liberian women and sensitize Liberian men. There is much that Ireland can learn from Liberia."