Women stand up against racism and discrimination in Ireland 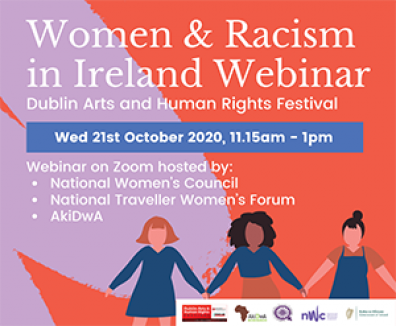 The National Women’s Council (NWC), the National Traveller Women’s Forum and AkiDwa today highlighted the impact of everyday racism on women and the need for us to build a society that respects and promotes diversity at its webinar ‘Women and racism’. The event was part of the Dublin Arts and Human Rights Festival, organised by Smashing Times and Frontline Defenders.

“Racism and discrimination have a major impact on the everyday lives of women and their families in Ireland. We as women’s organisations are coming together today to show our solidarity and to stand against racism and how it undermines women’s rights and equality in our society. Together, we want to build an Ireland free of racism where everyone is treated with dignity and respect. We call on the Government to take racism and discrimination seriously and take concrete steps to address it. This must include an end to the inhumane direct provision system and the introduction of hate crime legislation which also includes misogyny.”

“There is detrimental impact of racism on migrant women which has devastating consequences for their full enjoyment of equality and fundamental human rights in both the public and private spheres.The State must take steps and action to support and protect migrant women. Hate crime legislation need to be put into place as a matter of urgency.”

“Racism in Ireland is not new. Travellers have been part of Irish society for centuries and are excluded and marginalised due to systemic racism and discrimination. Traveller women like other ethnic minority women experience multiple barriers due to the intersectionality of ethnicity and gender. For Traveller women around the country it feels like the situation is getting worse and particular instances of racism in politics in the last number of years underline that.”