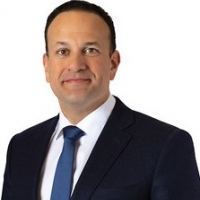 Yes. Some of the strongest influences on my life and career are women: most notably my mother and my two sisters and also my female friends.  They’ve always challenged me to see the world differently, and to understand the challenges women often face when it comes to things like childcare, career progression, and work-life balance.  Some actions I took as Taoiseach, for example, bringing in better parental leave, paternity benefit, greater financial support for childcare was influenced by the experiences of the women in my life and wanting to make a difference. I’m also mindful that a lot of the work-life challenges that parents face can sometimes be regarded as women’s issues to solve when in fact they are challenges for both men and women and the solutions should involve both.

I’m not going to say the repeal of the 8th amendment, because that was something that was achieved by so many people in Irish society, over a long period.  As Taoiseach I provided an opportunity for the people to make that decision and they did.

Two other things stand out.  First, we ratified the international convention on violence against women, the Istanbul Convention. There is an epidemic of violence against women and that needs to stop.  We also incentivised political parties to field more women candidates because I want Dáil Éireann and Council chambers to be more representative of our society as a whole.  Gender equality is good for men as well as women; it benefits everyone.  We get better results when there is a diversity of views around the table.  And we’re going to do more.

What is the most important change that you want to achieve for women’s equality if (re-)elected as Taoiseach?

Yesterday [Saturday 25 January] the Citizens’ Assembly on gender equality, that we established, met for the first time.  We are asking it to bring forward proposals on a range of issues that affect women today.  If re-elected as Taoiseach I want to drive forward with its recommendations and build a society where we have true gender equality at all levels – in homes, in workplaces, in Government, and throughout our country.

As a society, we will be stronger when we hear women’s voices.  With gender equality we can enhance our capacity to think creatively, and our ability to come up with new and better solutions.

We're also introducing gender pay legislation to make sure that men and women are paid the same for doing the same work.

I was fortunate to be able to lead a Government with Ministers as talented as Heather Humphreys, Regina Doherty, Katherine Zappone and Josepha Madigan, and not forgetting Frances Fitzgerald who was my first Tánaiste, or Helen McEntee, and her work on Brexit, or Mary Mitchell O’Connor who sits at Cabinet and leads on higher education.  Only 19 women have been Cabinet ministers in the history of the State.  That must change and that will change.  Only 11 women TDs supported the outgoing Government, so to have a gender balanced Cabinet we need more women TDs.   That’s what Fine Gael is working to change. We have 25 women candidates this time out.