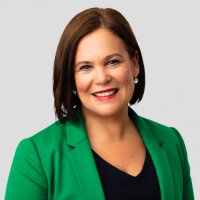 Yes, I do. Feminism at its core is about equality and the equal treatment of men and women. That is what Sinn Féin is about - building an equal society. We are committed to changing the type of attitudes that prevent this, including the gender pay gap, and ensuring that we have a diversity of voices in public office to build a fairer, more inclusive society.

I think the campaign to Repeal the Eighth Amendment was a significant victory for women in this State, and I was very proud to play a small part in that. I am also proud of the role that I have played, among many others, in the campaign for recognition and justice for women who were incarcerated in Magdalene Laundries.

I think we still have a huge amount of work to do on various issues, but one that I have worked on for many years is the issue of domestic violence. One in five women experience violence in their own home, and over forty percent of Irish women know someone in their circle of family or friends who have experienced intimate partner violence.

As a society we need to step up to our responsibility to ensure that domestic violence victims’ rights and entitlements are enhanced and protected.

The establishment of independent regional multi-agency domestic homicide reviews would be an invaluable tool to protect women and eliminate domestic violent crime in this regard, and I would also like to introduce legislation to provide for a statutory entitlement to paid leave for those who suffer domestic violence.

Ultimately the decision of who serves in Cabinet is one for the people to make. However, we have seen the effects of successive government decisions that have disproportionately affected women; particularly women from disadvantaged backgrounds. This shows the necessity of a Cabinet, and government that is representative of all sections of society.