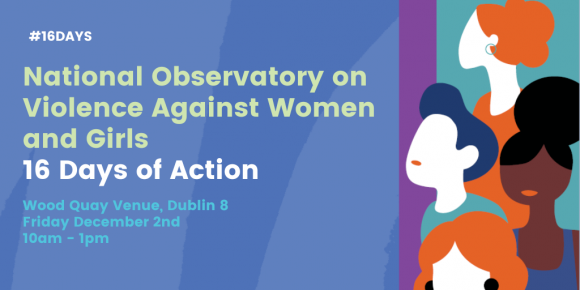 The National Observatory on Violence Against Women is hosted and chaired by the National Women’s Council and is an independent network of 22 grassroots and national organisations that come together regularly to monitor progress on domestic, sexual and gender-based violence.

The Observatory, in partnership with the European Parliament Liaison Office in Ireland, are hosting a seminar to launch the Observatory’s Grevio shadow report and mark the significance of our new Third National Strategy on Domestic, Sexual and Gender Based Violence.

This event takes place within the 16 Days of Action to End Violence Against Women, and aims to mark a highly significant moment in Ireland: the first review of Irish progress since Ireland ratified the Istanbul Convention and the new National Strategy.

Ireland has undergone rapid legislative transformation to meet its Convention obligations, including the Third National Strategy, launched this year, which fulfils a great number of Istanbul requirements , and is groundbreaking in its recognition of the inherent violence and abuse of commercial sexual exploitation and the sex trade. Yet, despite these welcome developments there is still urgent need for the effective and accountable implementation of the Convention and the Third National Strategy. This year’s conference will examine what has been done, what is being done and what needs to be done in this regard.

The Observatory has been conducted research and produced this report with the support of the Community Foundation for Ireland.

This is organised in partnership with the European Parliament offices in Ireland.