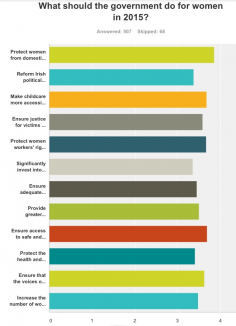 A massive thank you to the hundreds of people who participated in NWCI’s New Year’s Poll! Nollaig na mBan faoi mhaise daoibh – we hope you all have a fabulous Women’s Christmas! If you were one of those who participated in our poll, consider becoming a member of NWCI and ensure we have something to celebrate on January 6th 2016!

• NWCI’s New Year Poll was online from December 18th until December31st.
• There were 575 responses in total, outlining what people want the government to prioritise for women in 2015.
• 96% of respondents were women, 3% were men and 1% identified as outside the gender binary.
• Over 60% of respondents were between 18 and 40. A further 30% were between the ages of 44 and 55.
• The poll consisted of twelve options on issues such as domestic and sexual violence, political reform, childcare, justice for victims of institutional abuse, women worker’s rights, investing in training and education, family leave policies, abortion, direct provision, ensuring the voices of vulnerable women are heard and increasing the number of women in senior decision making positions.
• These are all issues which NWCI and our members work on, and the response to the survey was huge.
• The survey asked respondents to answer whether the above issues were ‘very important,’ ‘important’, ‘less important’ and ‘I don’t know’.
• Due to the large number of options, it would have been too confusing to ask respondent to weight each of the twelve options. Due to the flexible nature of the poll questions, it was possible that respondents could rank all options as ‘very important.’ However, we can see from the results that there was a definite pattern in terms of what women want for 2015, with three issues polling more strongly than others.
• The top three issues ranked by respondents as ‘very important’ were 1) protecting women from domestic and sexual violence, which was viewed as ‘very important’ by 86.68%, 2) ensuring access to safe and legal abortions, which was seen by 81.24% as ‘very important’ and 3) affordable, accessible childcare with 72.55% believing it to be ‘very important’.

The results in full

1. Protect women from domestic and sexual violence 86%
2. Ensure access to safe and legal abortions 81%
3. Make childcare more accessible and affordable 73%
4. Protect women workers' rights and ensure decent pay for women 71%
5. Ensure that the voices of the most disadvantaged and vulnerable women are being heard 70%
6. Ensure justice for victims of institutional abuse 66%
7. Provide greater work-life balance and opportunities to share care work more equally 62%
8. Increase the number of women in senior leadership positions in Ireland 60%
9. Ensure adequate pensions for all women 55%
10. Protect the health and welfare of asylum seekers by ending the direct provision system 64%
11. Significantly invest into training and education for young women 51.1%
12. Reform Irish political culture to make it more appealing to women 51% 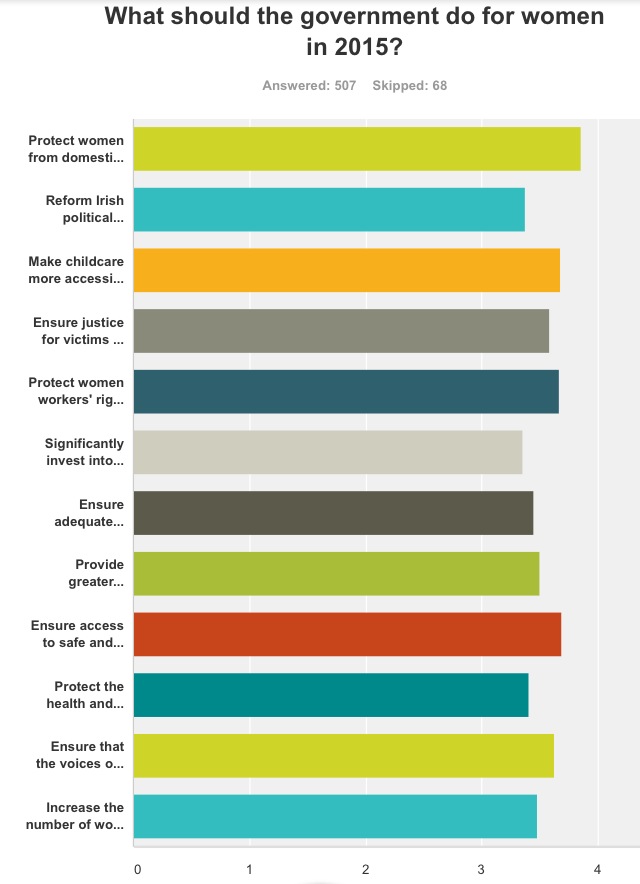