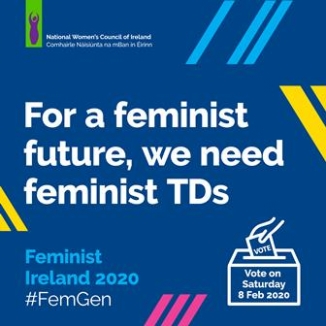 The National Women’s Council of Ireland (NWCI) today (Tuesday, 21 January 2020) launched their Feminist Ireland manifesto, saying pre-election give aways provide no solutions, and instead called on general election candidates to show their commitment to women’s equality by signing up to its ten key asks.

“This election has the potential to set the political agenda for the next five years, and will be crucial in deciding the future direction of this country. At a time where we have the highest childcare costs in Europe, one of the highest rates of women homelessness in Europe, and only one third our recommended refuge spaces for women fleeing violence, it is critical that general election candidates showcase their commitment to women’s equality.”

She said,
“One in four women in Ireland experience physical and sexual violence.  After Ireland finally ratified the Istanbul Convention on violence against women in 2019, we need candidates who will prioritise its full implementation, including strengthening legislation and investing in frontline services, and ensuring Ireland has enough refuge places. We are also calling on candidates to commit to establish domestic homicide reviews, so that we can develop a best practice response in relation to domestic violence including risk assessment and risk management.”

She concluded,
“We have seen from recent controversies such as CervicalCheck that women’s health must be given consistent focus and dedicated resources. Ireland has had a litany of historic health scandals effecting women, and we are still in the midst of two women’s health controversies – CervicalCheck; and concerns over religious control of the national maternity hospital. We have to put a sustained focus on women’s health, on the gaps that exist in services and in driving the change that women have been so active in calling for publicly. We’re calling on candidates to commit to the delivery of SláinteCare, to develop women centred mental health services, to introduce universal, free contraception and to ensure access to the full range of abortion services across the country.”

NWCI’s Feminist Ireland Manifesto highlights 10 key areas to bring about much needed change for women in Ireland. By signing  up to the manifesto through NWCI’s website (https://www.nwci.ie/general-election-2020), candidates will commit to supporting these policies if elected to Dail Eireann.

NWCI has members and followers in every constituency in Ireland. We will be in close contact with them throughout the election campaign and provide regular updates on the support for our Breakthrough Manifesto. People will also be able to follow conversations around the General Election from a women’s equality perspective on #FemGen.